Poker Hand Rankings – What Are The Best Poker Hands 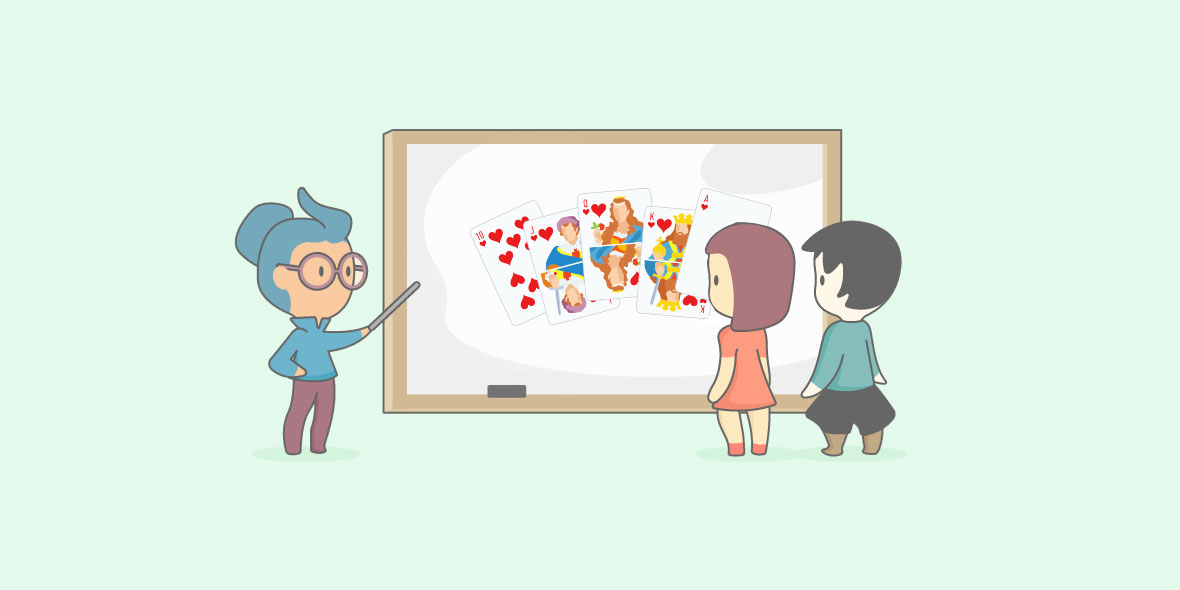 Poker is a very simple game. There are only 10 named poker hands. They are (in rank order)

The player with the highest-ranked poker hand wins.

It is not uncommon that two players have the highest-ranked poker hands. We will explain how the winner is decided in specific situations later in the article.

As a general (poker) rule, however, higher cards beat lower cards in most tied situations. If players have a hand of equal value, then the pot is shared.

From this list of 10 poker hands, you can arguably remove half of them either because of their rarity (Royal Flush, Straight Flush or Four of a Kind) or because of their lack of strength to win against a table of opponents (Pair, High Card).

However, we will describe each poker hand in detail to give a complete overview but dwell on the important ones in the rankings and introduce you to the important poker rules.

The behemoth of all poker hands.

The number one in a list of poker hands.

As unbeatable as Vladimir Putin in a presidential election.

The hand consists of the Ace, King, Queen, Jack and Ten of the same suit.

Its rarity means you could play millions of hands of poker and never be able to make a Royal Flush.

It’s more likely to be seen as a weak plot device by a lazy screenwriter than on an online poker table.

Still, it needs to be on the list because it is King of the Hill but don’t expect to see it any time soon.

Almost as rare as a Royal Flush when you play poker is a Straight Flush (sometimes referred to as a running flush).

It consists of any five consecutive cards of the same suit.

A Straight Flush is not nearly as rare (roughly ten times as common) as its royal relative but the chances of achieving it are still pretty slim.

Four Of A Kind

A common trope in poker movies sees one player reveal a hand of four Kings only to be beaten by four Aces.

As cliched as this motif is, it does neatly explain the poker hand Four of a Kind.

There are obviously only 14 Four of a Kind in a pack of cards so it’s not hard to imagine how difficult it is to have four of the same rank in your hand (let alone two players having this hand at showdown).

Still, it is much more common than the first two hands above and the odds of Four of a Kind is 0.168% in Texas Hold’em which in fractional odds equals a 594-to-1 chance.

Now we are getting to the seriously achievable hands in poker. A full house is three cards of one rank and two cards of a different rank…..making a full house!

It is the rank of the set of three which is important in determining a winner between two full houses – the higher pair ranking is irrelevant (unless they are of equal value).

Given the much higher frequency, a Full house will appear in your hand it is always worthwhile assessing the table dynamics as it is possible another player will have a similar hand.

You can generally deduce this from betting patterns and the board texture.

In relative terms, it is still fairly uncommon as the odds of having a Full house is 2.60% in Texas Hold’em which equates to backing a 33/1 winner at the racecourse.

One is the most common questions regarding poker hands is ‘Does a Full House beats a Flush?’

The only answer is yes.

But it is easy to see where the confusion comes from as the chances of getting either hand are pretty similar.

A Flush is a hand that contains only cards from one particular suit – hearts, diamonds, spades or clubs (but not connected…otherwise that would be a running flush).

In Texas Hold’em you are going to need a minimum of three community cards being of the same suit to make the hand meaning it can be a little difficult to disguise.

However, if you have the Ace of that suit you are in a pretty strong position as the rankings come into play when determining the winner.

And just to reiterate, a Flush may look pretty but it does not beat a Full House.

A Straight is one of the fun hands in Texas Hold’em as it is easy to disguise (and arguably easy to represent in a bluff).

A Straight is a five-card poker hand in numerical order but of different suits.

An open-ended straight draw is particularly interesting as it is one that has four connected cards giving a player eight possible ‘outs’.

Although it can be difficult to confidently bluff if you miss.

This is also known as a Broadway Straight, named after the glitzy theatre venue in New York and possibly alludes to the prevalence of skyscrapers in the area.

A Straight is a strong hand under any poker rules.

In terms of probability, players can expect this hand to appear 4.62% of the time which in fractional terms is a 20.6/1 shot.

Three Of A Kind

Also know as Trips (short for triplet), Three of a Kind is one of the most common winning hands in poker and only just less prevalent than a Straight.

Three Aces is the best Three of a Kind, while three 2’s (Deuces) is the lowest.

This is the first hand of those described where other cards come into play to decide an eventual winner of a poker hand.

Have the highest card of any hole cards unused in making Three of the Kind and you are more likely you are to win the hand at showdown.

If players have the same best rank card in their hand, it is then decided by their final card.

The first unused card in the hand is known as a ‘kicker’. The kicker is basically a tie-break card of hands of equal value.

Although it looks nice in your hand and is a pretty common holding, Two Pair is a poker hand you will struggle to win money with unless you are playing short-handed or heads-up.

As the name suggests Two Pair consists of any two different pairs!

It is a fair hand to be holding going down to the turn (fourth card) and the river (fifth card) given there are some ‘outs’ for you to make it into a Full House but generally you will be behind in a lot of situations especially when faced with a raise.

Think carefully before getting too attached to this hand even if you are holding high cards. Pocket Aces (a pair of Aces) may have looked good as hole cards but if no further Aces have hit the flop then you may be in trouble.

There is a whopping 23.5% chance of making Two Pair, making it one of the most common hands in a poker game. In fractional odds that comes out as a 9/4 chance (3.26/1 to be exact).

One Pair as your hole cards and you may be in pretty good shape.

One pair from five cards and you will likely need pretty strong bluffing skills or a lot of luck to take down the pot.

This because statistically, this is the most common hand to a Texas Hold’em poker player.

You can expect to have this holding 43.8% of the time.

Unless you are holding high cards on a pretty dry board then you will not be in good shape against most of your opponents.

The lowest ranking of all the poker hands is the High Card. It is actually harder to get a hand where the best you can make is ‘x-high’ It is statistically easier to hold a Pair (once two pairs are included).

Probably only in heads-up poker will a high card hand take the money and even then you will be looking at Ace-High or a very high picture card.

The above gives you the odds for the best poker hands in Texas Hold’em variant (the most popular form of poker).

The odds will vary in games like Omaha, Stud and lo-ball but the poker hand rankings remain the same.

One of the easiest poker tips to give is to find a poker starting hand chart.

For beginners, they will find out the range of hands you should be playing based on your starting hand.

It can keep you out of a lot of trouble and will suggest things like Ace-Nine offsuit is not a hand you want to be involved with (especially when playing out of position on a full table!).

It will also show you the type of strong hands you can play confidently.

Any pocket pair might look good at first glance but from certain positions, anything below a Jack may become problematic.

It is a handy cheat sheet to get you started rather than an ultimate poker strategy guide.

How To You Learn Poker

Within time, the poker hand rankings will become second nature to you at the poker tables.

Feel free to bookmark this page.

There will be times when you wonder whether a Straight Flush beats Four of a Kind; a Full House bests a Flush; or if a Three of a Kind trumps Two Pair (they all do, by the way).