Knockout Tournament Strategy: How to Win at Poker Bounty Tournaments 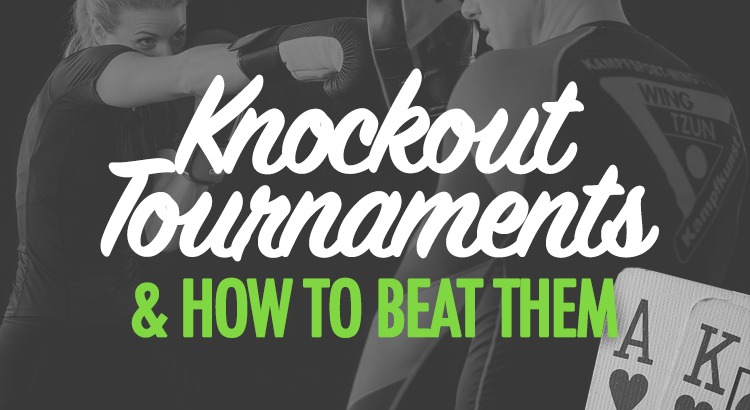 Recently a new trend has swept across all of the major sites – knockout tournaments.

This fresh format puts a bounty on the head of all players, so if you knock them out you get that money instantly credited to your account. The more people you knock out, the more money you accumulate.

With this new trend comes a whole new set of variables to think about.

You need to adapt traditional strategy to accommodate this change of perspective because really, the game has changed. Let’s take a look at the main types of tournament.

There are two main types of knockout poker:

In a classic knockout tournament, a portion of your buy-in will go above your head and when somebody eliminates you they’ll take that and it will be directly credited to their account. For example:

I buy in for $10 and there is a $3 bounty, so $7 goes into the prizepool and $3 is up for grabs for whoever eliminates me. Let’s say I eliminate 5 players and go on to win. I’d get all the prize money for 1st place, 5 bounties for $15 and then my own bounty is returned for an extra $3 as nobody knocked me out.

The other variety, which is becoming a lot more popular, is the progressive knockout format.

In this format, a certain amount of your buy-in goes towards your bounty but when you eliminate a player you only get half of it. The other half is then added to your bounty making you more valuable to knock out. For example:

This is exactly why knockout bounty strategy is so important:

In these progressive knockouts, by the time you reach a final table the bounties upon players heads can be huge, and can even be bigger than the prize money payouts.

This, combined with the fact that bounties can now be up to 50% of your buy in, means that a lot of your decision making should now be based around winning bounties and not just laddering for bigger prize payouts…or even to cash in the first place.

The game might seem very similar to normal tournament poker, but in fact it plays quite differently.

You need to think about the usual aspects in a slightly different way.

Let’s take a look at some of the most important factors and how you should adjust your play.

The first step is identifying that a large % of the prizepool is now only available if you win bounties.

The divide for tournaments can be as steep as 50/50, so if you aren’t taking into account bounties then you are realistically shutting yourself off from a portion of the prizepool and making it hard to make money!

With progressive knockouts you also need to look at the payouts because the money for cashing, final tabling and winning is greatly reduced because so much has gone into the bounties.

Logically, this means you need to pivot your strategy at least partly towards the knockout side of these tournaments.

With the above in mind, you have to consider what your stack is in relation to the field a lot more and more importantly how you’re stacking up against your table.

If you don’t have anyone covered, you aren’t able to access any of the bounty money.

This means that in certain formats you need to take more risks early on to put yourself in good positions later on to hoover up bounties. For example:

You enter a 36-person hyper-KO bounty tournament. These tournaments have 50% in the prize pool and 50% in bounties. You’re on a 6 handed table and start with 500 chips, the big blind is 50. If you start in the big blind you have 50 chips invested and therefore when somebody raises or goes all in you can do the maths and work out what you should be calling with. However you also now need to think about the situation if you fold. With 450 chips you’re now going to be unable to knock out any of the other players (who should have starting stack or more) and theoretically you’ve cut yourself off from 50% of the prize pool.

Now this doesn’t mean that you need to just recklessly gamble early on in order to spin up chips, but it means you have to take more risks, play a more high variance style and try to put yourself in the best possible position when the bounties get higher.

Knockout poker changes how you have to think about equities.

Your decisions can be made depending not just on the % equity your hand has against their range but also if you have more chips than the player.

For calculating ranges, obviously take everything into account from your HUD. If you still don’t have a HUD, check out our round up of the best poker HUDs of the year.

If you’re able to knockout a player and get their bounty you have to consider how big their bounty is and what it’s worth in relation to the buy in and prize pool.

This all leads into altering ICM decisions because the value of each player’s chips is dependant on their bounty.

ICM stands for independent chip model and it’s used to convert tournament chips into money, letting you work out what each chip is worth at this moment.

If somebody has a massive bounty on their head then their chips are worth a lot more to you than somebody else’s. This in turn means you can change your calling range when knocking somebody out because the chips you can win are theoretically worth more than the chips you’re risking.

The maths of knockout poker is different from regular tournament poker and if you don’t make the adjustments and take these chances to win knockout bounties you’ll be left fighting just for the prize pool, which is dramatically reduced in these formats.

The Power of Chips

Having a lot of chips has always given you a lot of control in poker tournaments, especially around the bubble. By utilising the large stack, you’re able to put pressure on shorter stacks who are trying to make it to the cash.

In knockouts you can put this pressure on every hand because there is money to be won every hand.

Shorter stacks are constantly at risk and will eventually have to take a stand, meaning that even if you’re an underdog in the hand you’ll have the chance to win their bounty.

Trying to create large stacks in poker tournaments hardly counts as strategy information, but knowing just how powerful each of your chips is in a tournament is very important to your thought process.

Knockout poker offers a unique variety of strategy that keeps the game interesting.

You’re looking to avoid spots where you’re calling off all in with fewer chips than your opponent. In these situations you’re at risk and can’t win a bounty even if you win.

Wherever possible you need to be putting pressure on shorter stacks and making them play for it all. This allows you to bluff, bully and hopefully win more bounties than other players.

Knockout poker is a great variety to throw into your grinding schedule because it allows you to mix it up.

With these different tournament comes fresh new decisions to be made based on unique situations. With a lot more to think about it adds a new dimension to the game we love to play.

Knockout poker is rewarding aggression and taking chances, and while this can make it higher variance the format allows for a low lower chance of going home empty handed.

You’ll score at least one bounty more often than you’d cash in normal tournaments so there is at least some money coming back to you from more tournaments. That’s great for recreational players as it allows them to learn more and play more without risking as much.

The knockout tournaments are popular with more recreational players which in turn makes all the games better for grinders.

There is an increased feel of competitiveness with each player setting out to try and come home with as many scalps as possible. While they might take some adjustments they’re pretty good for poker and can be beaten with a few different strategy choices.

Knockout tournaments can be frustrating but they’re almost like learning a new poker game from scratch which can be exciting and rewarding.