How to Play Small Pocket Pairs for the Most Profit 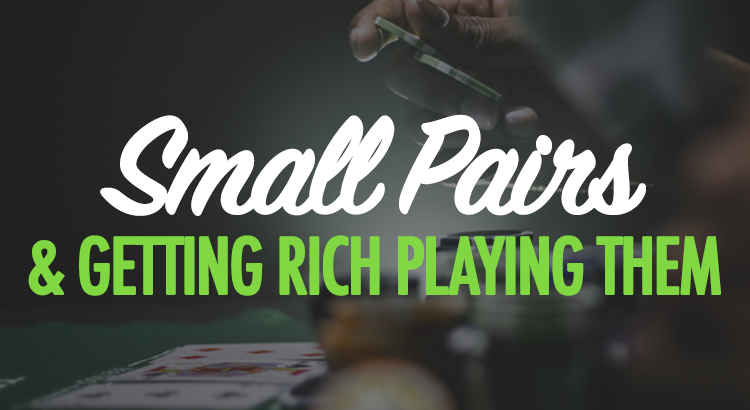 We’ve all had the struggle of thinking of the best way to play small pairs in no-limit hold’em.

They can be difficult pre-flop and post-flop and leave us in some tricky spots.

We’ve also all scooped some pretty great pots with our pocket pairs, but more often than not they’ll lose us money.

So what’s the trick? How should we be playing them?

When we talk about small pocket pairs we general consider pocket twos (or deuces) through to pocket sixes.

On face value, these hands are going to be relatively strong against opponents random hands, but we still need to know how to approach them, and more importantly what changes we need to make depending on the format.

“Small pairs have loads of value if you’re able to see the flop cheaply. They’re also easy to play after the flop. For example, if you call to see the flop with a pair of deuces, you likely will continue only if you hit another 2 on the flop; otherwise, you’ll probably fold. If you’re lucky enough to catch trips, you’re set up to win a big pot, especially if an opponent has a hand like top pair.”

They’ve all got a slightly different strategy but the fundamentals are the same.

It’s important to play them correctly or you might find your money going up in flames.

Let’s take a look at the key elements of playing small pocket pairs:

This set, or three of a kind, is a really strong hand and you can be confident it’s going to be the best hand in a lot of situations.

When we hold small pocket pairs this is the nut best situation for us because we’ve dramatically improved our hand but it remains fairly disguised.

Implied odds refer to the amount we will potentially win when we hit our hand.

They’re crucial to the way we play pocket pairs.

Often when we hold 22-66 going into the flop, multi-way, we won’t be holding the best hand and if we are it’ll be really tough for us to navigate the later streets.

We’re looking to make a set.

It’s incredibly rare to be getting such a good price so you need to look beyond the immediate odds and see what you could win if you hit your set.

So take a look at your opponent’s chips and make sure he has enough that it’s worth your call to hit your hand, if not then you can throw it away. It’s not just about how many chips you have, but also about how many they have.

There’s a lot of other variables that dictate where and how you should play pocket pairs and some other information to consider when working out implied odds.

Let’s go through some of the main topics:

Position is one of the most crucial things in no-limit hold’em.

By being one of the last to act you have the most information about action, hand strengths and it gives you the most control.

When holding a small pocket pair, there is a very high chance that the flop will bring over cards.

This will then give us an underpair to the board, and it is going to be very difficult to try and find out whether or not we are ahead.

You don’t want to be calling 3-bets (or re-raises) out of position with these types of hands unless you have a very good read on your opponent. This is why when playing small pocket pairs in position is crucial because it lets you control the pot size more effectively.

You can build the pot when you hit big and potentially keep it smaller when not.

You’re also in a much more effective position to turn your hand into a bluff, or even value bet thin with weaker holdings.

Always consider your relative position, and your position throughout the hand before playing these small pocket pairs.

Making the tight fold from early position can often save you money in the long run.

Knowing your stack size and your opponents stack size is crucial for no limit hold em. You know what you can win, what you can lose and how to size your bets. Generally you’ll be deeper in cash games and shallower in tournaments so this should factor into your thinking.

Pocket pairs are most valuable in deep stacked games.

You’ve got healthy implied odds if you hit and can look to make a lot of chips.

You do have to be wary though.

The deeper you are, the more cautious people can become post flop (not wanting to risk it all with a hand like an overpair). This can slow down the action.

You’ve also got to bare in mind the set-over-set situation where you can potentially lose a lot of money as it can be hard to get away.

However, deep stack is where you want to be with your pocket pairs, ideally in position and in a multi-way pot to give you the best possible immediate price with your implied odds on top.

Short stack poker is a very different game to deep stack and limits your options.

It’s rare you’ll have enough chips to bet all three streets and you’ll often be all in by the turn or river.

You have to tailor your strategy to protect your stack and make small gains.

Small pocket pairs are valuable for shorter stacks but in a different way.

When you’re short-stacked deep in a tournament, winning the blinds adds a big proportion to your stack.

In early positions with small pocket pairs there isn’t much you can do.

If you raise and get re-raised, you’ll have to give it up and if you get called it’s tough to win out of position.

However, in later positions you can go all in with as many as 20 big blinds and you’ll find people have to fold a lot of hands to you.

You might get called but a lot of the time if they have broadway cards like AK or AQ it’s a coin flip anyway and can put you back in contention.

Overall, you’ll need to be tighter in early position when you’re shorter stack and look to make big moves in late position.

If you’re super short (less than 10 big blinds) you can consider shoving all in with all of your pairs, because you need to take the shot at a double up and pairs are still relatively strong hands.

All successful poker players are changing their strategy based on their opponents, with small pocket pairs it’s no different.

We need to consider some key traits of players, or analyse their stats that show in our poker huds, around the table before putting our chips in.

If we’re on a table full of aggressive players who are 3-betting and 4-betting pre flop then we have to be careful.

If we call a single raise with our pair we could end up getting squeezed out by the re raises because the price is too high.

In these situations we should limit our calls to when we’re in later positions and have seen the action before putting in chips.

Alternatively if the table is passive then you can consider limping in cheaply to see a flop.

If you’re in late position it might be worth raising yourself to limit the number of people going to the flop.

That way you can win by hitting a set, but maybe even taking it down with a continuation bet in position.

We’ve all been at tables with the loosest guys around (the BEST games) and we’ve also played games which are tight as can be with no action.

It’s important to identify the differences and work out how we should play our hands accordingly.

In tight games, we need to take advantage of our implied odds.

If the guy with moths coming out of his stack finally raises and we have a pocket pair we need to be calling.

It’s likely he holds a premium like QQ, KK or AA and if we hit our set it’s going to be hard for him to get away which is good news for us.

If the table is loose, we’re going to have less implied odds because their hands are going to be relatively weaker.

It’s going to be multi-way to the flop a lot of the time which means we’ve got better immediate odds.

It’s simple for us to navigate flops even multi-way because if we don’t hit a set we’re probably getting out of there with an easy fold.

It’s always worth taking the time in between hands to look at the players and the table and start putting a picture together of how the game is flowing.

It’s never as simple as tight vs. loose but you’ll be able to identify who you have the best implied odds against.

You have to play to avoid being blinded off which means you can’t let your small pairs go to waste.

It’s a math equation. It’s hard to get a pair!

At the start of a tournament you’re playing deep stack poker, often with over 100 big blinds.

This is the perfect situation to play your small pairs!

What you want is to get in for as little as possible and flop a set and crack opponents with strong holdings such as overpairs.

The ideal way of doing this is to be in position, which lets you control the pot size plus gives you some extra value if you miss and are able to steal the pot.

Multi-way pots are ideal as you get a better price for hitting a set and more potentially customers if you do.

Beware of raising your pocket pairs in early position because if you don’t hit your trips then you’re often facing multiple over cards.

Out of position you open yourself up to be bluffed and won’t have a strong enough hand to get to showdown.

Later on in the tournament the average stack goes down, often under 30bbs.

This changes the value and play of small pocket pairs for the player.

You now aren’t deep stacked enough to look for implied odds so you’re playing the value of the pair and leveraging the pressure you can put on people.

Looking to get all in, especially in later position, with your small pocket pairs can see you stealing the blinds and antes or maybe getting a double up through a coin flip.

This can make small pocket pairs real bankroll boosters because they give you great implied odds.

Get in cheap and hit big to scoop the pot.

Always remember to be aware of your position, the opponent’s stack size and how they’ve been playing.

Focus and pick out the correct spots and small pocket pairs can be one of the most powerful weapons at a cash game table.

Small pocket pairs need to be handled carefully and you have to adjust to the different dynamics.

Weaker players waste their stack away chasing sets with the incorrect odds, or calling down with under pairs to the board and losing.

You have to stay disciplined, focused and most importantly have a plan for how you want to handle the spot.

Small pocket pairs are a way to win big pots when you’re way ahead.

With a bit of run good and some flopped sets you could have some great winning sessions and continue on route to becoming a profitable player.